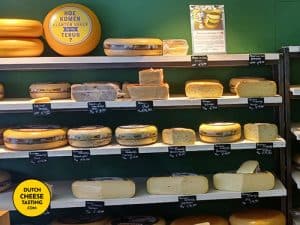 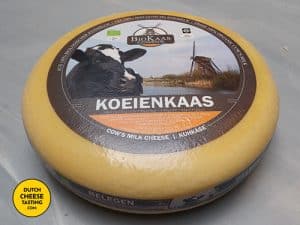 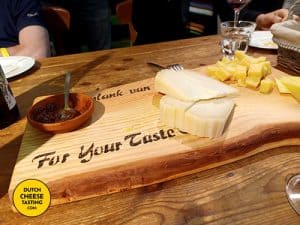 Any Dutch cheese that comes as a wheel!

It really is as simple as that. All the cheeses pictured above are gouda, because they all came as a wheel. The third picture is a mature (circa 8 months old) goat’s cheese. Obviously it’s cut and sliced, but it first came as a wheel, like those in the first picture.

It is a bit more technical than that, as gouda is all prepared in a certain way (for example, the milk is heated to 37 degrees when the rennet is added). But that’s how the Dutch make it. Gouda can be as young as two months old and as old as…. well, theoretically it can age forever, but I haven’t heard of a Dutch shop selling anything over seven years old (and that is not at all common).

Marcel, the owner of For Your Taste Only, the shop where we hold our tastings, sells a four year old gouda. And the term gouda applies to sheep’s and goat’s milk cheeses too.

For our American visitors, you’ve probably come across a few very specific cheeses which are referred to as gouda in Whole Foods or wherever you get your kinda fancy European cheese!

These are probably a mature cow’s milk cheese from the Netherlands and which are  anywhere from 8 – 15 months old. These absolutely do count as gouda, but as I pointed out, you can get older and younger gouda, and from goats and sheep.

The Organic Cheese Maker That Provides Our Gouda

The general quality of cheese in the Netherlands is quite high. So, if you go to any random store in Holland you’ll likely get good cheese. Having said that, there are smaller cheese makers that supply organic cheese to the smaller cheese shops. One of these is BioKaas Kinderdijk. They’ve been around for 50 years and the farm is near Rotterdam. They supply all six of the gouda cheeses that we use for our cheese tastings. You can read more about them here (but you might want to brush up on your Dutch first!):
http://www.biokaaskinderdijk.nl